Hot water might not seem dangerous but it can harm your skin in the long run. Overexposure of skin to water tends to wash away all the sebum produced in the outermost layer of our skin making it waterlogged, which eventually results in wrinkles. Apart from this, hot water is known to disturb the moisture level of our skin, making it dry. Just in case you have dry skin or any other allergies, then dry patchy flakes and rashes are to be observed normally.

So, it is always advised to wear gloves while doing dishes due to the overexposure of hot water (as the greasiness only goes away with hot water). But, getting the best dishwashing gloves for hot water chores can be a bit tricky.

Following are the best dishwashing gloves for hot water according to our research which could be perfect for you:

These are explained in detail later in the article.

To protect your hands from getting damaged because of overexposure of hot water while dishwashing, always try and wear dishwashing gloves. They can increase your efficiency in washing dishes by giving you some extra grip on your dishes, protecting your nails and hands from long term damage (from exposure to dishwashing soaps and harsh detergents), and also allowing you to wash the dishes in even hotter water (so that you can perfectly wash your dishes leaving no space behind for greasiness).

In case the gloves that you just bought are a bit bulky and stiff in nature, they might not work out for you to wash /clean delicate dishes such as chinaware. Also, if the gloves aren’t comfortable or lined from the inside, then they aren’t the ones as it can get really sweaty on the inside making it difficult for you to take it off or putting it on again. If the glove is short in length and is not covering up your cuffs or sleeves properly, then the water would probably splash over the edges of your gloves and slip into it, making it worse.  So, it always better to choose the right dishwashing gloves.

Wearing gloves while dishwashing has been considered mandatory in order to prevent your hands from damage. We always search for good and decent products in a comfortable price range that can fulfill the same purpose as that of the more expensive ones. Talking about the best dishwashing gloves for hot water, the latex gloves can be your smartest option.

It is well known that they have broad use in food, clinical settings, and homes. They are a good choice as rubber is a polymer of isoprene which implies that it is a natural product and is safe to use. In addition to this, they are also good at biohazard protection.

Neoprene gloves can also be used for dishwashing as they are manufactured in a way to provide maximum protection from harsh chemicals such as detergents and dishwashing soaps. These gloves are magnificently known as corrosive gloves in a ton of spots. After getting to know about the chemistry of this product, you get to know that neoprene gloves are pretty defensive for most kinds of hydrocarbons but still act powerless for halogenated hydrocarbons and fragrant hydrocarbons. All in all, they are a very good option.

PVC, also known as polyvinyl chloride, is a type of plastic that is usually used in manufacturing dishwashing gloves because it is really inexpensive and is easy to dispose off. PVC gloves are ideal for dishwashing because they are known to be excellent for reactions with minimum chemical hazards such as dishwashing soap.

Gloves made with butyl are very dense in nature which makes them perfect for dishwashing as hot water tends to dry up your skin by washing out the sebum produced in the outermost layer of your skin. In such a case, butyl gloves come to the rescue because of their molecular structure. They insulate the inner moisture and act as a barrier to protect your skin by not allowing the hot water to pass through it. (reminding you that in the long run, apart from drying up your skin, hot water can cause skin burns).

The only disadvantage of these gloves is that they are expensive and not everyone can afford them. So, if your dishwashing sessions are extremely chemical-based, then definitely go for this one-time investment as they are worth it.

Nitrile gloves are also known as natural rubber gloves due to their composition of natural compounds that combine together to form much better and safer gloves as an alternative to the latex gloves. Nitrile gloves are the most common dishwashing gloves you’ll ever come across because they are affordable and can be used against any product that is less acidic in nature such as, detergents, dishwashing soaps alkalis, mild soaps, etc.

You can always get your hands on one of these gloves if you are on a budget as they almost serve the same purpose as that of the above-mentioned gloves.

Heat resistant gloves are known to be the gloves that you can use to prevent burns or injuries while contacting with hot materials like hot water for washing dishes. For dishwashing gloves, yes, at times some dishwashing gloves are usually made up of rubber so that they can be heat resistant. Their efficiency depends upon their quality and material type.  There are many reasons to choose rubber gloves over any other gloves for dishing washing with hot water.

The best dishwashing gloves for hot water (without compromising on the quality and keeping the budget in check) are the Casabella water block dishwashing gloves. They are known to be thick in texture, long in length (providing almost full protection till your elbows) and lined; which provides about an unrivaled combination of both grip and comfort if compared to any other gloves.

On the brighter side, these gloves are lined with cotton flock lining, which makes it easier to put these gloves on and to take them back off. The cotton lining also acts as a sweat-absorbent, so that after use, your hands aren’t sweaty or sticky. 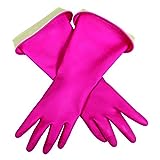 Casabella gloves might be a bit expensive as compared to other alternatives, but they are proven to be the best gloves for kitchen chores whether it is cleaning or dishwashing.  There are many advantages of this product as it is durable, heat resistant, has long cuffs, splash guard, and is soft on the inside with a cotton flock lining which makes them one of the best gloves for dishwashing with hot water.

The only drawback to this product is that it is a bit on the pricier side and is made up of latex which can be a problem for people who are allergic to latex.

Lanon gloves are known to be multipurpose gloves that are designed in such a way that you can use them for dishwashing, cleaning, and gardening. These gloves have an advance flocking technology with plush cotton lining that makes it breathable by absorbing all the sweat and maintaining the moisture level (making it convenient for the user to easily take off or put on).

Along with cotton lining, they also have an amazing grip pattern on the fingers and palm of the glove to grasp delicate and greasy dishes easily.

Lanon gloves are one of the few dishwashing gloves that are certified by Intertek and meet CA prop. These gloves are known to be durable and waterproof gloves with resistance to greasy products which makes it a hit among the users!

The only drawback of this glove is that the sizes are limited, it is only available in medium and large sizes which affect its sale in the market as nobody would prefer buying a pair of gloves that is a bit bigger than their actual size and doesn’t fit properly. So, check your size before going for it.

We all know that while washing dishes, there are some dishes that require scalding with hot water which can damage your hands later on causing burns or drying them up. Heavy-duty rubber gloves are thick and stiff in nature which implies that they aren’t easy to prick or tear off. On the outside, these gloves have a rubbery feel but with a good grip and long cuffs. On the inside, they are lined with cotton flocking which gives them a surprisingly soft feel.

One big pro of these heavy rubber gloves is that they are made up of neoprene which makes it friendly for people who are allergic to latex. Apart from all this, you can wash these gloves in the machine. The gloves are about 12 inches long in length. A few drawbacks of the product are that it does not have a folded cuff for the splash-back and are stiffer in nature.

Almost all the dishwashing gloves are claimed to be water-resistant, but the actual point is about the gloves being heat resistant because greasy or oily dishes are difficult to wash without hot water just as certain dishes require scalding with high temp water. So, it makes it hard to do it with any common dishwashing gloves. Thus, it is really important to make the right choice while buying dishwashing gloves and hopefully we have helped you a little bit in this matter.